Nora Ayanian is an Assistant Professor of Computer Science and director of the Automatic Coordination of Teams Lab at the University of Southern California, in Los Angeles, CA, USA. She received the Ph.D. and M.S. degrees in Mechanical Engineering from the University of Pennsylvania. Prior to joining USC, Ayanian was a postdoctoral associate at MIT’s Computer Science and Artificial Intelligence Laboratory (CSAIL). Ayanian studies and develops end-to-end solutions for coordinating teams of robots, combining automation and artificial intelligence to create autonomous collaboration and control. These solutions take very high level specifications, such as simple multi-touch input from a tablet, and provide automated code delivery to all robots in the team. Her solutions are broadly applicable across all aspects of multi-robot systems and mobile sensor networks, including manufacturing, warehousing, environmental monitoring, precision agriculture, and emergency response.

Ayanian was named as one of the MIT Technology Review’s 2016 Innovators Under 35 (TR35) as “Visionary”. In 2016 she also received the NSF CAREER award, the Okawa Foundation Research Grant, and, with her coauthors, best paper in the robotics track at the International Conference on Automated Planning and Scheduling. She has also been honored as one of mic.com’s inaugural Mic 50, and as one of IEEE Intelligent Systems “AI’s 10 to Watch”. Her research has most recently been covered by USA Today, Discovery Channel Canada, Tech Insider UK, and other media outlets. She is a co-founder and co-chair of the IEEE RAS Technical Committee on Multi-Robot Systems.

Gianni A. Di Caro, Ph.D.: To swarm, or not to swarm, that is the question:  Self-organization vs. Decentralization in networked multi-robot systems

Gianni A. Di Caro is an Associate Teaching Professor in the Computer Science department at Carnegie Mellon University. He is in the CMU campus in Doha, Qatar, where he teaches courses in fields of Artificial Intelligence and Robotics. He graduated in physics, summa cum laude, at the University of Bologna (Italy) in 1992. In 2004 he received a Ph.D. in applied science with full honors from the Universite’ Libre de Bruxelles (Belgium). Between 1996 and 2002 he has been awarded three TMR / Marie Curie individual fellowships and one Japan Science & Technology fellowship from the scientific institutions of the European Community. Before joining CMU He has worked in a number of international research laboratories around the globe: IRST (Italy), IRIDIA (Belgium), ATR (Japan), IDSIA (Switzerland). His research interests are strongly multi-disciplinary, and include autonomous robotics (with a focus on swarm robotics, human-multirobot interaction, planning and scheduling), swarm intelligence and bio-inspired computing, artificial intelligence, mathematical optimization, adaptive networking. In these fields he co-authored more than 130 scientific works, that, according to Google Scholar, have currently received more than 16,300 citations. He has been the coordinator of ALMA (Ageing without Losing Mobility and Autonomy), an Ambient Assisted Living (AAL) project, and the co-recipient of several project grants from Swiss and European funding institutions.

The present work considers a new cellular robot which is based on adaptive tetrahedral elements (ATEs). Each ATE has a micro-controller, a battery, a wireless adapter and six actuators, representing the tetrahedron’s edges. A system of ATEs forms an adaptive robot with tetrahedral structure, which is intended to represent any geometry with a piecewise flat surface. Contrary to existing cellular and tetrahedral structures, the ATEs are connected along their deformable faces. This allows to represent almost any spatial shape with the tetrahedral structure. Furthermore, the ATEs follow the principle of light-weight design, which shall reduce the total weight and performance of cellular robots. The miniaturization of the present robotic system has the potential to lead to a programmable matter, which is seen to be a game changing technology.

Colias is a low-cost, open-platform, autonomous micro robot which has been developed for swarm robotic applications.

Mona is an open-hardware/open-source robotic platform that has been developed to be used in swarm robotic scenarios especially to study on Perpetual Robotic Swarm. 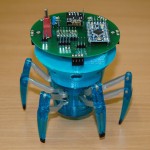 Spiderino is a low-cost research robot based on the small size of the Hexbug Spider toy.  The basic modification replaces the robot head with a 3D-printed adapter, consisting of two parts to provide space for sensors, a larger battery, and a printed circuit board (PCB) with Arduino microcontroller, Wi-Fi module, and motor controller.

The prototype costs less than 70 Euro, and is suitable for swarm robotic experiments and educational purposes.